LOOKING FOR SOMETHING SPECIAL? TRY THESE PAGES~ 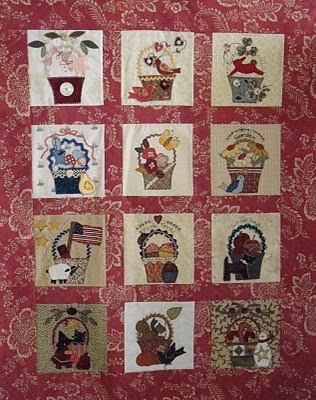 This is my quilt made from the free pattern from Bunny Hill Designs  A TISKET, A TASKET.  One pattern was released each month for the year of 2009.  I began my basket blocks using vintage rick rack handles.  This spurred a desired for the rick rack handle to be different each month.  It was really fun to rick rack my brain (sorry) to try to come up with ideas for the next months basket handle.  I was quite pleased when the year was over.  I took the following pics to show you the results.  It was definately
Rick Rack Fun! 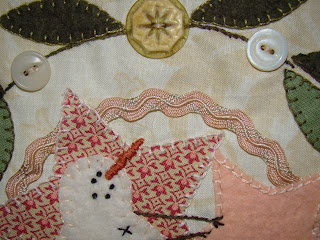 This is the block that started all this Rick Rack madness!  A really unusual rick rack that just happened to be a perfect handle for my snowy Snowman Basket block. 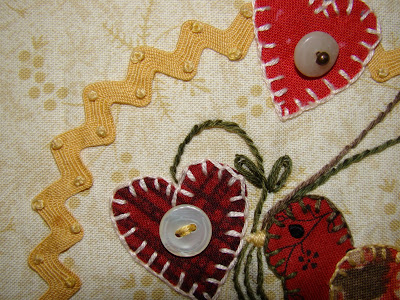 Next came February and I chose a golden yellow rick rack and tacked it down with French Knots.  This is a technique that is used on a vintage 1930's apron that I own.  I chose to match the thread to the rick rack on this one. 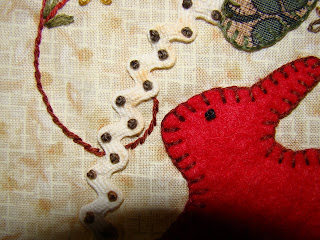 The same technique for February here, only I used a different color thread for the French Knots. 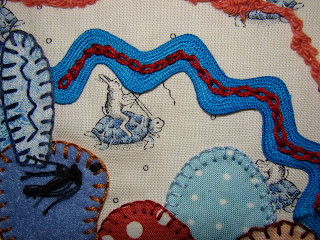 April--I chose a wide Rick Rack and tacked it down with a Chain Stitch using contrasting thread. 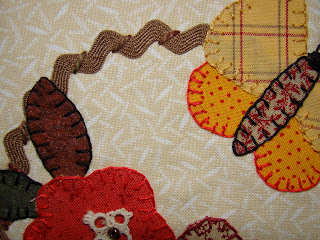 MAY--hhmmmm--Plain Rick Rack in Tan?  The embroidery thread that tacked it down proved to make the process resemble a real woven basket handle!  What do you know!! 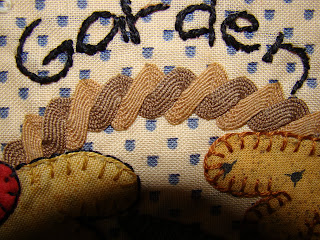 In June, I decided to try weaving two shades of brown into a single unit.  It actually amazed me how great it worked!  Don't you think?  It looks like a woven twig basket handle to me. 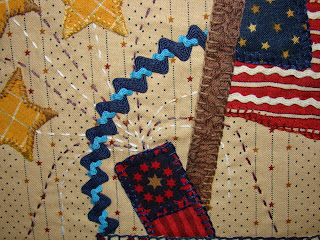 July is the same technique of weaving or wrapping two rick racks together, but this time I used two sizes and of course I had to use blue for my Red, White and Blue patriotic block. 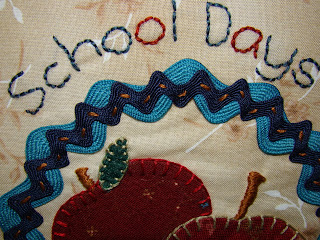 Ok, it's September and I am running out of ideas.  Can I make it to December?  Lets' try a medium rick rack laid atop a large and using a seed stitch for tacking.  Oh yah!  I like it! 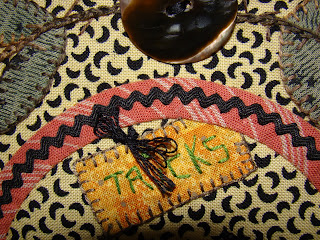 October.  It occured to me to use a regular bias strip and top it with a rick rack.  Black is appropriate for this particular month and I chose small in size.  Large rick rack and a bias strip on top would have looked equally as good--maybe better--I will have to try that! 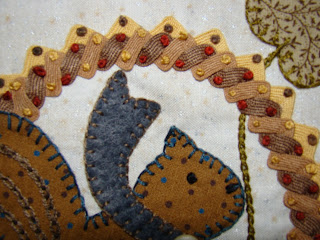 Ok--Back to the drawing board.  Let's combine a couple of techniques.  The weaving and the French Knot tacking.  and let's throw in a third layer.  It works!  One more month to go. 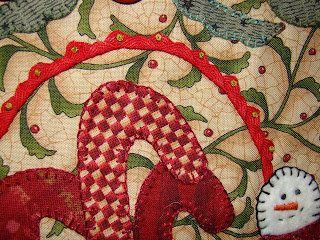 Down to the wire, I decided to try a folding technique.  I folded the bottom side up and tacked with a matching thread (so it wouldn't show) and then the other side with a French Knot in contrasting thread.  I like it.  It's delicate and decorative--perfect for Christmas.
You know--the possibilities are endless.  I have to say that this Block of the Month was such fun and I believe that one reason is because I was so involved with the challenge of the rick rack basket handles.
If you chose to try some techniques of your own, I will give you one tip.  When I was tracing my pattern with a light box, I put some dots to use as a guideline for placing the rick rack.  Then I used some dots of glue to hold it in place until I stitched --whether it was one layer or three.  A touch of the iron tip dries the glue immediately.  Hope you will try some
Rick RacK Fun!

Thanks for stopping by--Please Come Again!

My mother is will be 82 years old on November 30, 2008. She has severe dimentia and is barely functioning as she has lost most of her memory... 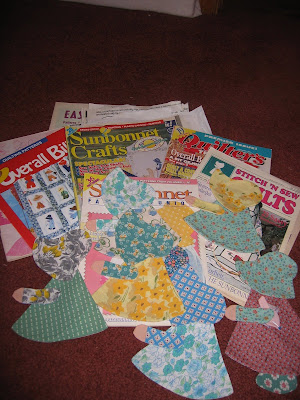